The Umayyad Mosque, also known as the Great Mosque of Damascus , located in the old city of Damascus, is one of the largest and oldest mosques in the world.

After the Muslim conquest of Damascus in 634, the mosque was built on the site of a Christian basilica dedicated to John the Baptist (Yahya), honored as a prophet by Christians and Muslims. A legend dating to the 6th century holds that the building contains the head of John the Baptist.[citation needed] The mosque is also believed by Muslims to be the place where Jesus (Isa) will return at the End of Days. The mausoleum containing the tomb of Saladin stands in a small garden adjoining the north wall of the mosque. 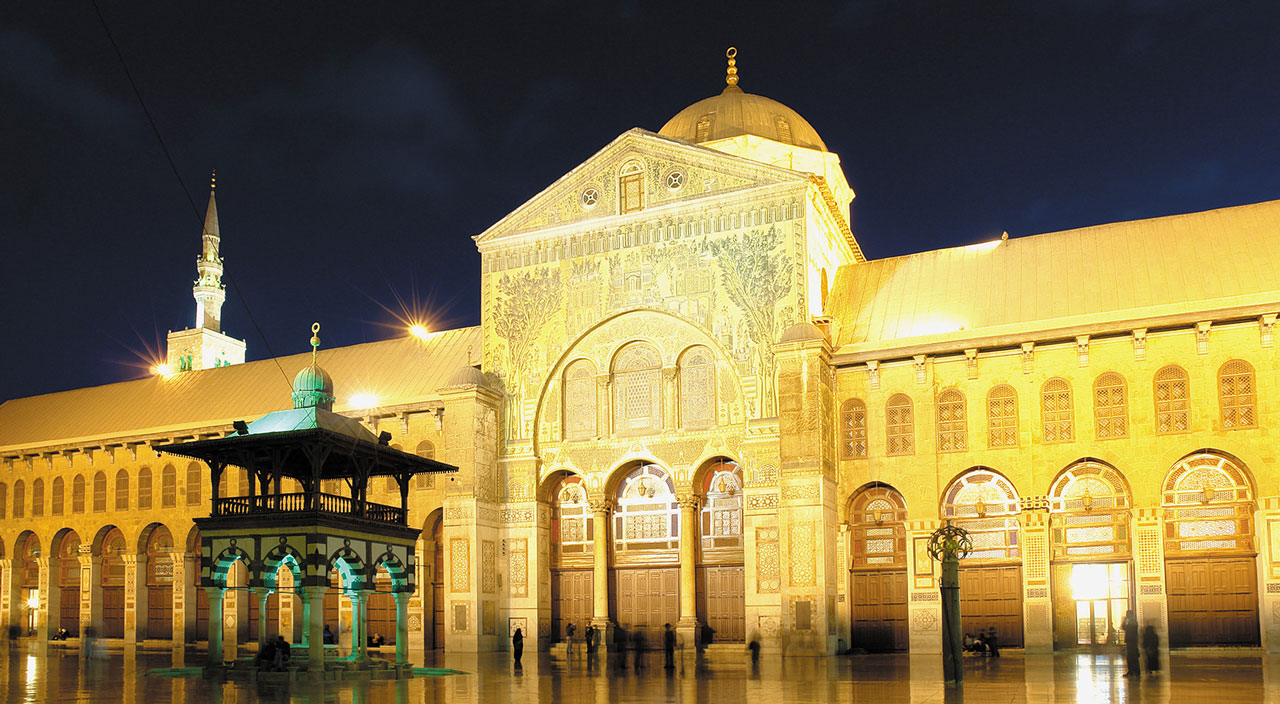 Our Lady of Saidnaya Monastery or Our Lady of Seydnaya Monastery is a Greek Orthodox monastery located in Saidnaya, Syria. It is one of the most ancient monasteries in the world and in the region of the Middle East and North Africa. It is run by a religious order of nuns. It is an important pilgrimage site for Christians and Muslims, who visit an icon of Saint Mary which is attributed to St Luke. 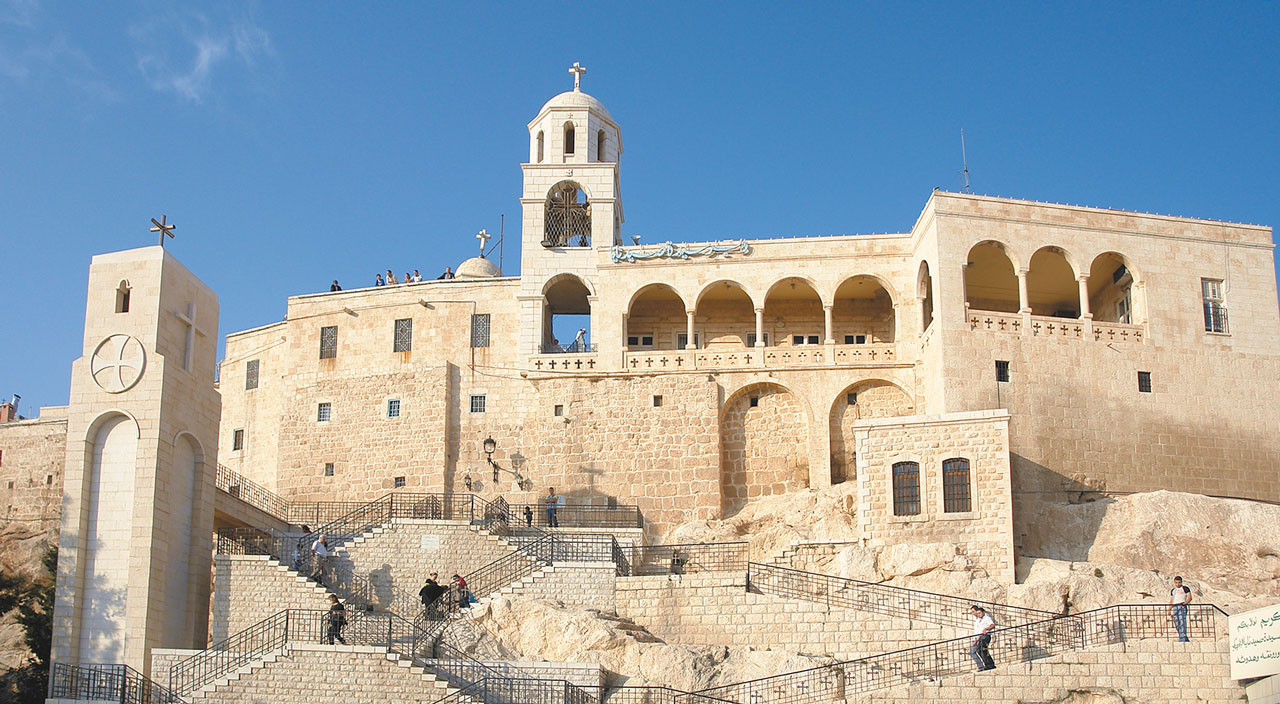 Maaloula or Maҁlūlā is a town in the Rif Dimashq Governorate in Syria. The town is located 56 km to the northeast of Damascus and built into the rugged mountainside, at an altitude of more than 1500 m. It is known as one of three remaining villages where Western Neo-Aramaic is spoken, the other two being the nearby villages Jubb’adin and Bakhah. 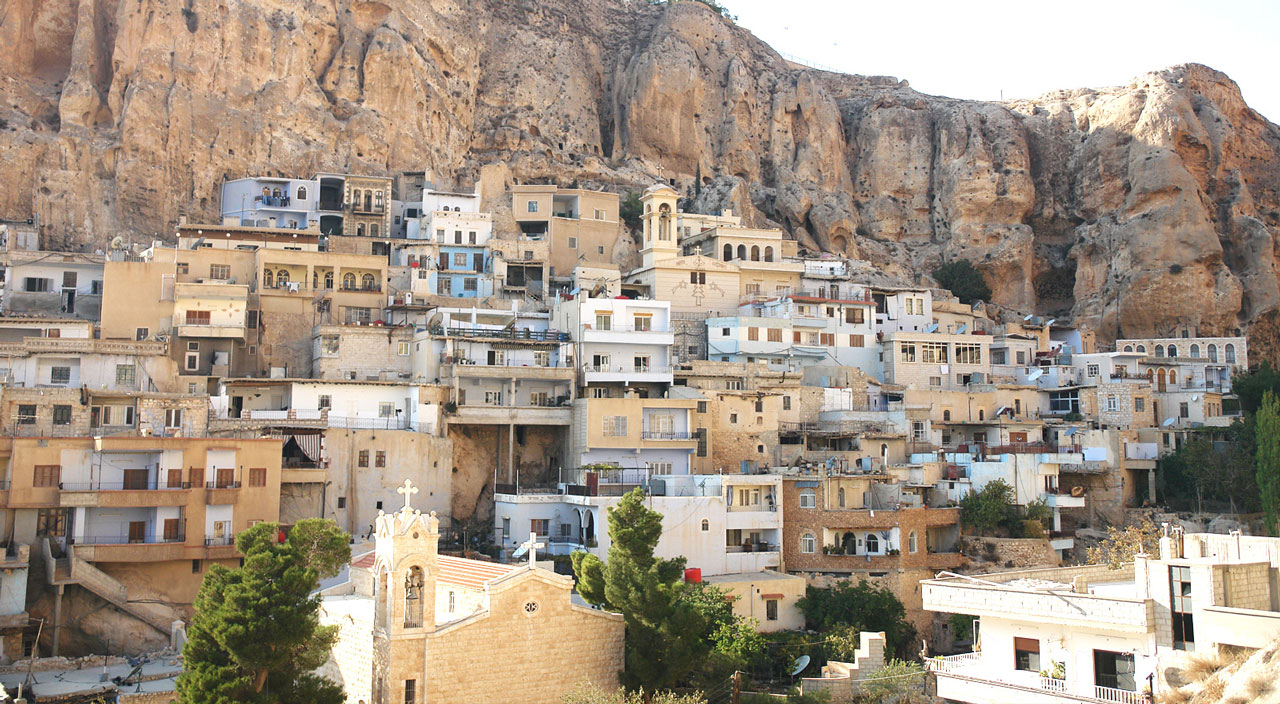 The Church of Saint Simeon Stylites is a building that can be traced back to the 5th century, located approximately 30 kilometres (19 mi) northwestern part of Aleppo, Syria. It is one of the oldest surviving church complexes. It was constructed on the site of the pillar of Saint Simeon Stylites, a renowned recluse monk. The church is popularly known as either Qalaat Semaan (قلعة سمعان‎, Qalʿat Simʿān, the ‚Fortress of Simeon‘) or Deir Semaan (دير سمعان‎, Dayr Simʿān, the ‚Monastery of Simeon‘).

The Citadel of Aleppo is a large medieval fortified palace in the centre of the old city of Aleppo, northern Syria. It is considered to be one of the oldest and largest castles in the world. Usage of the Citadel hill dates back at least to the middle of the 3rd millennium BC. Subsequently, occupied by many civilizations including the Greeks, Byzantines, Ayyubids and Mamluks, the majority of the construction as it stands today is thought to originate from the Ayyubid period. An extensive conservation work took place in the 2000s by the Aga Khan Trust for Culture in collaboration with Aleppo Archeological Society. Dominating the city, the Citadel is part of the Ancient City of Aleppo, a UNESCO World Heritage Site since 1986. The Citadel received significant damage during the Battle of Aleppo. It was reopened to the public in early 2017 with repairs to damaged parts underway.

The Citadel of Salah Ed-Din, also known as Sahyun or Saladin Castle, is a medieval castle in northwestern Syria. It is located 7 km east of Al-Haffah town and 30 km east of the city of Latakia, in high mountainous terrain on a ridge between two deep ravines and surrounded by forest, the site has been fortified since at least the mid 10th century. In 975 the Byzantine Emperor John I Tzimiskes captured the site and it remained under Byzantine control until around 1108. Early in the 12th century the Franks assumed control of the site and it was part of the newly formed Crusader state of the Principality of Antioch. The Crusaders undertook an extensive building programme, giving the castle much of its current appearance. In 1188 it fell to the forces of Saladin after a three-day siege. The castle was again besieged in 1287, this time both defender and belligerent were Mamluks. In 2006, the castles of Qal’at Salah El-Din and Krak des Chevaliers was recognised as a World Heritage Site by UNESCO. The site is owned by the Syrian government.

Krak des Chevaliers, also called Crac des Chevaliers, Ḥoṣn al-Akrād, and formerly Crac de l’Ospital, is a Crusader castle in Syria and one of the most important preserved medieval castles in the world. The site was first inhabited in the 11th century by a settlement of Kurdish troops garrisoned there by the Mirdasids. As a result, it was known as Hisn al-Akrad, meaning the „Castle of the Kurds“. In 1142 it was given by Raymond II, Count of Tripoli, to the order of the Knights Hospitaller. It remained in their possession until it fell in 1271. It became known as Crac de l’Ospital; the name Krak des Chevaliers was coined in the 19th century.

Palmyra is an ancient Semitic city in present-day Homs Governorate, Syria. Archaeological finds date back to the Neolithic period, and documents first mention the city in the early second millennium BC. Palmyra changed hands on a number of occasions between different empires before becoming a subject of the Roman Empire in the first century AD.

The city grew wealthy from trade caravans; the Palmyrenes became renowned as merchants who established colonies along the Silk Road and operated throughout the Roman Empire. Palmyra’s wealth enabled the construction of monumental projects, such as the Great Colonnade, the Temple of Bel, and the distinctive tower tombs. Ethnically, the Palmyrenes combined elements of Amorites, Arameans, and Arabs. The city’s social structure was tribal, and its inhabitants spoke Palmyrene (a dialect of Aramaic), while using Greek for commercial and diplomatic purposes. Greco-Roman culture influenced the culture of Palmyra, which produced distinctive art and architecture that combined eastern and western traditions. The city’s inhabitants worshiped local Semitic deities, Mesopotamian and Arab gods.

By the third century AD Palmyra had become a prosperous regional center. It reached the apex of its power in the 260s, when the Palmyrene King Odaenathus defeated Persian Emperor Shapur I. The king was succeeded by regent Queen Zenobia, who rebelled against Rome and established the Palmyrene Empire. In 273, Roman emperor Aurelian destroyed the city, which was later restored by Diocletian at a reduced size. The Palmyrenes converted to Christianity during the fourth century and to Islam in the centuries following the conquest by the 7th-century Rashidun Caliphate, after which the Palmyrene and Greek languages were replaced by Arabic.

Margat, also known as Marqab from the Arabic Qalaat al-Marqab, is a castle near Baniyas, Syria, which was a Crusader fortress and one of the major strongholds of the Knights Hospitaller. It is located around 2 kilometres (1.2 mi) from the Mediterranean coast and approximately 6 kilometres (3.7 mi) south of Baniyas. The castle remained in a poor state of preservation until 2007 when some reconstruction and renovation began.

Apamea, on the right bank of the Orontes River, was an ancient Greek and Roman city. It was the capital of Apamene under the Macedonians, became the capital and Metropolitan Archbishopric of late Roman province Syria Secunda, again in the crusader time and since the 20th century a quadruple Catholic titular see..

Amongst the impressive ancient remains, the site includes the Great Colonnade which ran for nearly 2 km (1.2 mi) making it among the longest in the Roman world and the Roman Theatre, one of the largest surviving theatres of the Roman Empire with an estimated seating capacity in excess of 20,000.

Qasr Ibn Wardan is a hamlet and 6th-century archaeological site located in the Syrian Desert, approximately 60 kilometres (37 mi) northeast from Hama and about 19 kilometres (12 mi) northeast of al-Hamraa. The hamlet is separated from the Byzantine-era ruins by a road, with the former situated to the east of the road and the ruins situated to the west. According to the Syria Central Bureau of Statistics (CBS), Qasr Ibn Wardan had a population of 467 in the 2004 census